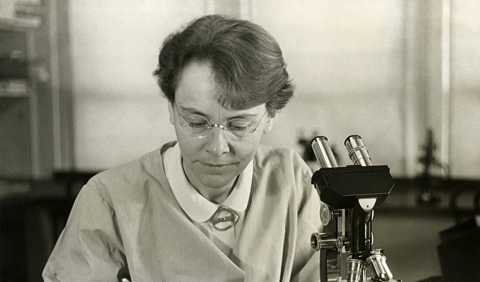 Barbara McClintock, born on June 16th, 1902, was a scientist and cytogeneticist who made a number of groundbreaking discoveries in genetics. She demonstrated the phenomenon of chromosomal crossover, which increases genetic variation in species. She also discovered transposition, genes moving about within chromosomes and showed that genes are responsible for switching the physical traits of an organism on or off.

Barbara McClintock went to high school in Brooklyn, New York. Barbara’s mother was uncomfortable with sending her to college because she believed it would turn Barbara into an oddball that nobody would want to marry. Eventually, in September 1919, Barbara’s father overcame her mother’s objections and Barbara went to enroll at Cornell University immediately.

In 1921, she took her first genetics course. Her ability and understanding of the subject matter propelled her into graduate level classes while still an undergrad. Excited and fascinated with the genetics of plants, she finished undergrad with a degree in agriculture in 1923.

In 1925, McClintock went on to earn her M.S. and Ph.D. in botany at Cornell University. Her M.S. and Ph.D. degrees involved investigations of plant genetics. This would be the focus of her research for more or less the rest of her life.

In 1930, McClintock was the first person to describe the cross-shaped interaction of homologous chromosomes during meiosis. She developed improved staining techniques, which allowed her to see chromosomes under the microscope better than anyone else had before.

In 1941, McClintock became a visiting professor at Columbia University.

In 1944, she became the third woman ever to be elected to America’s National Academy of Sciences.

In 1971, McClintock was 81 years old and revived the National Medal of Science from President Richard Nixon. A large number of other awards and honorary degrees followed, culminating in the 1983 Nobel Prize in Physiology and Medicine for her discovery of mobile genetics. Her discoveries were rejected for years by other scientists, but eventually they realized she was right all along.