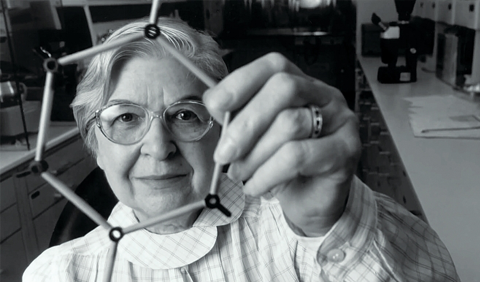 Stephanie Kwolek, born on July 31st, 1923, was an organic chemist, best known for inventing Kevlar in 1965. Kevlar is an immensely strong plastic, first used as a replacement for steel reinforcing strips in racing car tires, and now used in a large number of applications where high strength is required without high weight.

Age 23, Kwolek graduated with a degree in chemistry from Margaret Morrison Carnegie College of Carnegie Mellon University. She was quickly recruited to work as a chemist at Dupont Chemicals in Buffalo, NY. Four years later, she moved to Wilmington, Delaware where she spent the remainder of her career with DuPont.
After nine years of research work, Kwolek made her major breakthrough, discovering Kevlar. Her pathway to discovery began a year earlier, when she began looking for a new, lightweight plastic to be used in car tires. The idea was that lighter tires would allow vehicles to enjoy better fuel economy.

Not only did Kevlar find use in tires, its combination of lightness and strength has seen it used in a large variety of protective clothing applications, such as bulletproof vests, which have saved the lives of countless police officers and other people.

For her discovery, Kwolek was awarded the DuPoint company’s Laviosier Medal for outstanding technical achievement. As of August 2019, she was the only female employee to have received that honor. In 1995, she became the fourth woman to be added to the National Inventors Hall of Fame. Kwolek won numerous awards for her work in polymer chemistry, including the National Medal of Technology, the IRI Achievement Award and the Perkin Medal.

In 1986, Kwolek retired as a research associate for DuPont. Toward the end of her life, she consulted for DuPont, served on both the National Research Council and the National Academy of Sciences. During her 40 years as a research scientist, she filed and received either 17 or 28 patents. Kwolek died at the age of 90 on June 18, 2014.