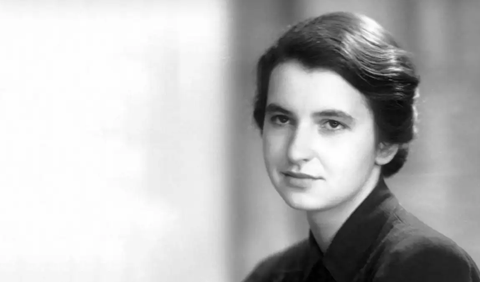 Rosalind Franklin, born on July 25th, 1920 was a chemist and X-Ray crystallographer whose work was central to the understanding the molecular structures of DNA, RNA, viruses, coal and graphite.

Rosalind Franklin grew up in a well-known Jewish family in pre-World War II London, and was known in the family for being very clever and outspoken. Her parents sent her to St. Paul’s Girls’ School, a private school known for rigorous academics, including physics and chemistry.

Franklin graduated from Newnham College at Cambridge in 1938 and took a job with the British Coal Utilization Research Association. She was determined to make a contribution to the war effort, and published several papers on the structures and uses of coal and graphite. Her work was used in development of the gas masks that helped keep British soldiers safer. Her work earned her a Ph.D. in Physical Chemistry awarded by Cambridge University in 1945.

In 1947, Franklin moved to Paris to take up a job at the Laboratoire Central working with Jacques Mering on perfecting the science of X-ray chromatography. However, in 1951, she reluctantly decided it was necessary to move back to London to advance her scientific career.

At King’s College in London, Franklin found she was expected to work with antiquated equipment in the basement of the building. She took charge of the lab with her customary efficiency, directing the graduate student, Raymond Gosling, in making needed refinements to the X-ray equipment. Around this time, Franklin and Gosling made a startling discovery. There were two forms of DNA shown in the X-ray images, a dry “A” form and a wetter “B” form. Because each X-ray chromatograph had to be exposed for over 100 hours to form an image, and the drier “A” form seemed likelier to produce images in more detail, Franklin set aside the “B” form to study later. She noted that the “B” form images appeared to show a definite helical structure and that there were two clear strands visible in the image she labeled Photo 51 before she filed it away.

In 1953, she decided to move to Birkbeck College to escape King’s due to strained relationships with colleagues. Somehow, during the move, Maurice Wilkins, a colleague came to be in possession of Franklin’s notes and the files containing Photo 51. Wilkins removed the photo from her records without her knowledge or permission and took it to show his friends at Cavendish. Photo 51 ended up being information needed to complete an accurate model of the structure of DNA.

Franklin, meanwhile, had moved on to Birkbeck. Part of the arrangement that allowed her to leave King’s was that she would not pursue any research on DNA, so she turned her talents to studying virus particles. Between 1953 and 1958, she made important discoveries about the tobacco mosaic virus and polio. The work done by Franklin and the other scientists at Birkbeck during this time laid the foundation of modern virology.

Franklin died on April 16, 1958, of ovarian cancer, possibly caused by her extensive exposure to radiation while doing X-ray crystallography work. Because the Nobel Prize can only be shared among three living scientists, Franklin’s work was barely mentioned when it was awarded to Watson, Crick and Wilkins in 1962. It is only in the past decade that Franklin’s contribution has been acknowledged and honored. Today there are many new facilities, scholarships and research grants especially those for women, being named in her honor.