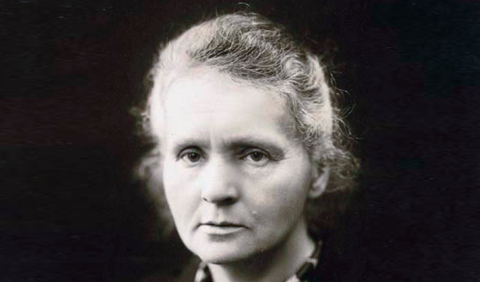 Marie Curie, born on November 7th, 1867, was a physicist, chemist and a pioneer in the study of radiation. She worked extensively with radium throughout her lifetime, characterizing its various properties and investigating its therapeutic potential.

In 1883, at the age of 15, Curie completed her secondary education, graduating first in her class. Curie and her older sister, Bronya, both wished to pursue a higher education, but the University of Warsaw did not accept women. To get the education they desired, they had to leave the country. At the age of 17, Curie became a governess to help pay for her sister’s attendance at medical school in Paris. Curie continued studying on her own and eventually set off for Paris in November 1891. Curie was a focused and diligent student, and was at the top of her class. In recognition of her talents, she was awarded the Alexandrovitch Scholarship for Polish students studying abroad. The scholarship helped Curie pay for the classes needed to complete her degrees, in physics and mathematical sciences in 1894.

Upon furthering her education, her curiosity led her to reports of German physicist Wilhelm Röntgen’s discovery of X-rays and by French physicist Henri Becquerel’s report of similar “Becquerel rays” emitted by uranium salts. Curie began to test uranium compounds. She experimented with a uranium-rich ore called pitchblende, and found that even with the uranium removed, pitchblende emitted rays that were stronger than those emitted by pure uranium. She suspected that this suggested the presence of an undiscovered element.

In March 1898, Curie documented her findings in a seminal paper, where she coined the term “radioactivity.” Curie made two revolutionary observations in this paper, Goldsmith notes. Curie stated that measuring radioactivity would allow for the discovery of new elements. And, that radioactivity was a property of the atom.

In June 1903, Marie Curie was the first woman in France to defend her doctoral thesis. In November of that year the Curies, together with Henri Becquerel, were named winners of the Nobel Prize in Physics for their contributions to the understanding of “radiation phenomena.” The nominating committee initially objected to including a woman as a Nobel laureate, but Pierre Curie insisted that the original research was his wife’s.

In 1911, Marie was awarded a second Nobel Prize in Chemistry for her discovery of the elements polonium and radium. In honor of the 100-year anniversary of her Nobel award, 2011 was declared the “International Year of Chemistry.”

However, her work with radioactive materials was what ultimately killed her. She died of a blood disease in 1934. The physical and societal aspects of the Curies’ work contributed to shaping the world of the twentieth and twenty-first centuries.