High Abundance Terpene Mix
The diversity of terpenes and terpenoids are recognized by the range of scents and flavors they produce. The terpene abundances can differ greatly between the strains of cannabis, from major terpenes, such as myrcene, often found in percent levels, to the minor terpenes, such as geraniol, mostly found in ppm levels or smaller.
Terpene testing and profiling can be difficult since the range of abundance across the profile can vary drastically. A CRM can provide a basis for more accurate testing results by taking into consideration the natural differences in concentration amongst the various compounds in a terpene profile.
With that in mind, our new terpene standard contains the most abundant terpenes found in cannabis products at our highest level of concentration. 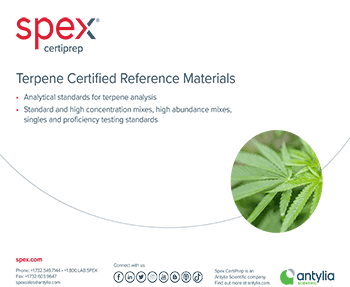